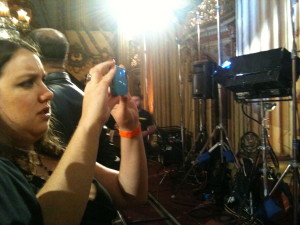 Lindsay Giggey received her PhD in the Cinema and Media Studies program at the Theatre, Film and Television department at the University of California, Los Angeles.

Lindsay’s dissertation focuses on the relationship between contemporary reality television and celebrity as sites for network and individual branding.  She is examining the labor involved in creating and maintaining celebrity as well as how issues surrounding media convergence have affected the proliferation (and dilution) of celebrity over the past decade.

She is the recipient of a Cota Robles Fellowship from UCLA.  Her most recent awards include the Plitt Southern Theater Employees Trust Fellowship from UCLA, the UCLA Theatre, Film, and Television Executive Board Grant, and a UCLA Summer Graduate Research Mentorship.  She earned her MA in Cinema and Media Studies from UCLA and her BA in American Studies from DePaul University.

She served as the Graduate Student Representative on the Board of Directors for the Society of Cinema and Media Studies from 2013-2015.

When not diligently working on her dissertation, Lindsay is involved in an unending quest to clear out her DVR and build her own reality television archive.